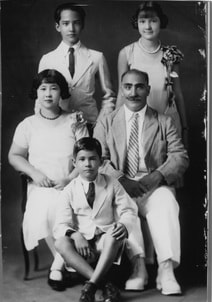 Joe seated in front, parents in middle, David and Ruth behind
JOE RICE (Joseph Flavius Rice) was born December 24, 1918 in Manila, Philippines (elder siblings Ruth and David were born in China). With his mother Esther (Chin, of Tianjin, China) and sister Ruth, he immigrated to the United States as a young teen (older brother David remained in the Philippines to finish high school). Joe junior graduated from San Francisco’s John Swett Junior High School (1934) and George Washington High School (1937). At the time of the 1940 census, he was 21 and living with sister Ruth and mother Esther in San Francisco.

Joe’s father, also Joseph Rice, was born in Hungary in 1882. He reportedly left home as a teen to join the merchant marines. In a 1963 interview for an article in Pacific Stars and Stripes, the senior Joseph Rice said that he, "began his uniformed career in the French Foreign Legion in 1899." A colorful and adventurous figure, he spoke numerous languages (including, by his own count, English, Chinese, Japanese, Tagalog, French, German and Hebrew), languages acquired through his travels and military assignments. It is presumably while he was assigned to the American Expedition in Tianjin that he met his Chinese wife, and, according to family lore, married her and “named her Esther.” He served in some capacity in the United States military prior to the first World War and during both World Wars I and II. After resigning his military commission the senior Joseph Rice bought a farm near Manilla , and served as chief of the harbor police. 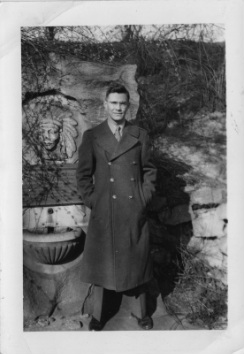 service uniform, WW II
During World War II Joe Rice served with the U.S. Air Force as a ground radio operator, in Italy. Prior to shipping out he graduated from the University of California, Berkeley (1943), where he majored in art and English. He married first wife June, also a Berkeley graduate (anthropology) in a group ceremony along with several other inductees during basic training. According to June, they met when Joe came to the Berkeley rooming house where she shared a big attic room with four other coeds; he was looking for one of the other girls, a vivacious blonde; the other girl wasn’t there and Joe and June got to talking.

After the war and while working as an art teacher in San Francisco (Everett Junior High School and then Roosevelt) Joe earned a Master of Fine Arts Degree (1958) from the College of Arts and Crafts. He continued taking art classes at the San Francisco Art Institute and then at Santa Rosa Junior College after retirement.

Joe Rice was a skilled and prolific painter, sculptor and jewelry maker. He studied, practiced and experimented with art into his eighties, when a series of strokes, a botched cataract operation and debilitating arthritis in his hands diminished his mobility, eyesight and manual dexterity. He died March 7, 2011 at the age of 92 in the peaceful Sonoma home he shared with his second wife.

Joe Rice is remembered for many things. His art. A dry, wry sense of humor that often went unnoticed or understood. The quiet competence he brought to any task. And, perhaps above all, his abiding humility—Joe could do many things well, yet he let his accomplishments speak for themselves. He is survived by his wives, his four children, two stepchildren, ten grandchildren and, as of this writing, seven great grandchildren.